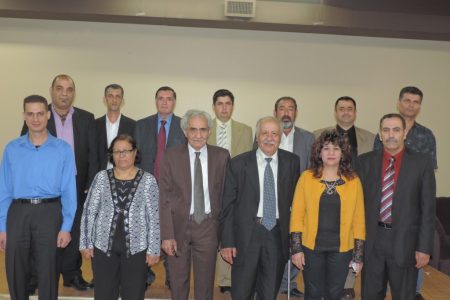 There are about 260 Mandaean Iraqi refugees living in Worcester, most coming within the past five to eight years, but while they call the city home, there is something missing. Actually, there are many things missing. A community of people the Mandaeans may be, but they are finding it difficult to assimilate themselves. From conducting baptisms, as is their custom, to filling out the proper tax exemption forms – community leaders here are asking for help in truly making Worcester their home.

“When we arrived here, they told us you are a free people in a free country,” says Saffaa Mhawi, who runs an organization called Haimnotha, or “the faith,” out of a small office they use for free at Central Las Americas on Sycamore Street. “We want to [do] our baptisms, our ceremonies, everything. We want to do it here.”

That is not always easy, however, because of language and other barriers. About 270 Mandaeans, who follow the teachings of John the Baptist, have come to Massachusetts. The majority, about 260, have settled in Worcester since the start of the war in Iraq. The first wave came around 2008. They have families and homes here, but struggle to adapt to other ways of life as well as rules and regulations that can prove problematic as they attempt to practice their faith. For example, baptisms in open water are an important part of the Mandaean faith. In Worcester, Mahawi says, they have encountered problems when trying to conduct them at Lake Quinsigamond. Forms must be filled out, he says.

The same problem has popped up as Haimnotha applies for legal, 501 (c)(3) status, which, if granted, would exempt the organization from federal income taxes. The status is available for nonprofits that meet specific criteria, such as being engaged in charitable, religious or educational work. Mhawi and the organization have found filling out the forms to be challenging.

“I went to a friend, a lawyer,” Mhawi says. “He says, ‘I will help you, but I’ll need 12-14 hours to fill out the form.’ He says he has a special price for nonprofits, $200 each hour. That’s so huge for us. We don’t’ have any resources, therefore we stop at this point. We still struggle for our dream.”

That dream involves building a life in America that proves inviting to all Mandaeans, he says. Given the violence and struggles currently taking place in Iraq, time would seem of essence. The Mandaean population in Iraq has dwindled significantly since before the war, when there were about 50,000 of them. Now, there are roughly 10,000 living in Iraq. Some, says Mahawi have been killed or kidnapped. Most have fled the country.

There are about 60,000 Mandaeans living around the world right now, in places such as Australia, Jordan, the UK, Canada, Denmark, German, Indonesia and Sweden. Some are in hiding in Iran, Syria and Turkey, waiting for the violence to end. An estimated 1,500-2,000 Mandaeans reside in the US.

Rhaeem Bader was among the first wave of Madaeans to come to the US. Thaaer Tawfeeq is another. Both serve on the organization’s Board of Directors. The group first opened an office on Main Street, offering services such as transportation and filling out forms for free.

“We paid the rent out of our own pockets,” Mhawi says. “There was no help for us. The only man helping us is Juan Gomez. He is giving us this office free as well as use of the main hall.”
Gomez is president and CEO of Centro Las Americas. He could not be reached for comment for this story.

With many members of the Mandaean community now having been here for five years or more, they are starting to apply for citizenship. Tawfeeq spends two hours every Sunday working with students and they learn the process to attain citizenship. The class is open to members of other Arabic communities as well.

Still, they yearn for their own school, a priest to call their own to perform the special baptism and marriage ceremonies so important to Mandaeans and other things many Americans take for granted.

“They are calling us, asking us, ‘How is life here? Can we come to America? You are all here,’” Mhawi says. “I say, ‘I encourage you to come to America.’ Sometimes we send letters, brochures about life here.”

Neither Mhawi, Bader nor Tawfeeq have encountered discrimination in America, a country Mahawi admits was hated when he lived in Iraq – not for its people, but its politics. Here, he says, he has encountered the opposite of discrimination and persecution.

“I remember something that happened when I arrived here five years ago,” he says. “My father had a heart attack. I took him to the emergency room. I will never forget that day. My father’s name is Abdul Hussein, it’s an Arabic general name. They asked his name and I told them. I was looking in their eyes and I didn’t find any sign [of hatred]. They were so good, so merciful.”

While life is good for them here, Mahawi is hesitant to bring over other Mandaeans without having established a real community that includes all of the things his people need and want.

That, as he has said, is the ultimate dream: a new place for Mandaeans that does not sacrifice their way of living, raising their families and practicing their faith. Actually, what he really wants is for his daughter to have a place to call home.