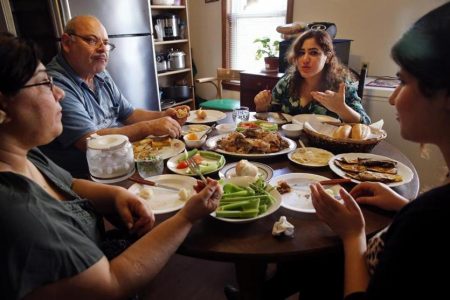 WORCESTER — They were kidnapped and murdered in Iraq, persecuted because of their ancient Mandaean religion and pacifist beliefs that made them easy targets amid chaotic, sectarian violence.

They fled in droves and found an unlikely home in Worcester, where 2,500 refugees now make up what is believed to be the largest Mandaean community in the United States and second-largest in the world outside the Middle East.

The Mandaeans have found safety and acceptance since they began arriving here in 2008, freely practicing a monotheistic religion that predates Christianity and Islam. But they still do not have a temple — a “mandi” for baptisms, marriages, and birth and death rituals — and whether one is built could determine if they continue to call Worcester home.

“Work is not the anchor, living in an apartment is not an anchor, the mandi is the anchor,” said Wisam Breegi, a leader of the Mandaean community.

Without a temple, Breegi said, the Mandaeans here are likely to see their numbers dwindle. And that would further splinter a culture that has fewer than 60,000 members worldwide, condones marriages only among its own, and does not accept conversions.

“We probably will disperse and lose faith. It worries me,” Breegi said.

A suitable temple, which must be built near running water, is now beyond the financial reach of the Worcester Mandaeans, Breegi said. They also do not have a priest, which means they must summon clerics from Detroit and even Denmark for important ceremonies.

“It really is a culture that is in danger of disappearing,” said Marianne Sarkis, an anthropology professor at Clark University. “If you don’t have a way of preserving the culture and traditions and even the language” of Aramaic — what a temple helps provide — “it is not going to survive very long.”

Theirs is a religion that reveres and protects nature. John the Baptist is a holy figure to them, but Jesus is not divine. And all important rituals are centered on the sanctity of a “living,” or moving, source of water.

For now, Breegi said, Lake Quinsigamond must serve that purpose. But finding property that provides access to water, as well as an estimated 3 acres to build a simple temple complex, has been difficult, Breegi said.

“We really don’t have the expertise, the know-how, the connections,” said Breegi, who also has founded a scientific firm that is developing a low-cost, disposable, neonatal incubator for use in developing countries.

To help forge the religious connections, Breegi and Sarkis are preparing an application for a nonprofit organization to help raise money for the temple. Worcester Mayor Joseph Petty said in an interview he is willing to help the project where he can.

“They’re all doing what everyone else is trying to do — working hard and getting their kids a good education,” Petty said.

At an April ceremony, officials in Worcester formally recognized the Mandaean presence in the city, home to an estimated 37,970 immigrants from 85 countries. Together, immigrants make up 21 percent of the city’s population. Statewide, the figure is 15 percent.

“It’ll just help make Worcester stronger in the long run,’’ Petty said of his city’s embrace of Mandaeans and other immigrants. “You can’t build walls between people.”

Aside from signaling that the city welcomes them, the ceremony represented the first time — anywhere, at any time — that Mandaeans had been recognized as a valued, important minority group, Sarkis said.

This is new to Sahar Kalmashy, a 23-year-old woman whose father, Mahdi, fled Baghdad with his family after two relatives had been killed. They spent five years in a refugee camp in Syria before arriving in Worcester.

“We feel safe now,” said Kalmashy, who studies at Quinsigamond Community College. “Back home, we didn’t have that feeling. As a child, I was called dirt and always asked the question, ‘Why don’t you become Muslim?’

“I’m a human, I’m an individual, I have a religion,” Kalmashy added. “Here, they are more interested in who I am. That’s the difference. There is a respect.”

Mandaeans have been ostracized and persecuted for more than 2,000 years, Breegi said, dating to their forced exile — along with many of the Jews — from Jerusalem to Babylon in the sixth century BC.

Most Mandaeans stayed in Babylon, in what is now Iraq, and in the adjacent lands of modern-day Iran. But after the fall of Saddam Hussein in 2003, the protection given in Iraq to minority religious groups — such as Mandaeans, Christians, and others — disintegrated.

Breegi, a critic of Hussein’s, fled Baghdad a decade earlier during the first Gulf War and settled almost by chance in Massachusetts, eventually choosing Worcester as a haven for other Mandaeans around the globe.

Worcester seemed to be a relatively affordable destination, with access to housing, jobs, and schooling.

“Iraq was never home — we were in exile,” said Breegi, 55, who had been a veterinarian in Baghdad. “Now, this is home. I always call Worcester a refuge by design.”

Directly or indirectly, all of the 2,500 Mandaeans in Worcester arrived here because Breegi sponsored them or because they migrated to the city from other parts of the United States to be near relatives and other Mandaeans.

Today, the city ranks second only to Liverpool, Australia, in the number of Mandaeans living outside of Iraq and Iran, Breegi said. More than 100 Mandaean marriages have been performed in Worcester, and the first generation of US-born children has begun to arrive.

“I personally would love the community to exceed 5,000,” Breegi said. “That would make it a very sustainable community for centuries to come.”

Brian MacQuarrie can be reached at brian.macquarrie@globe.com.