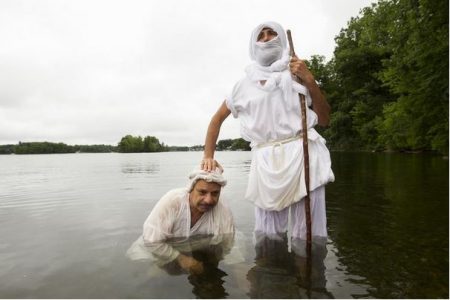 WORCESTER – The scent of incense contrasts sharply with the splashing in the water and the shrill oaths uttered in an ancient tongue.

“Kusta!” the Mandaean priest – one of several dozen in the world – says in a near-dead language, as the man he is baptizing repeats the Mandaic word, which means “truth.”

Both men and dozens on the beach are dressed in flowing white robes. Their dress, beards and features connote Biblical times. Indeed, they revere John the Baptist and consider themselves descendants of Adam, though there is much more to their intricate religion buried in detailed, poetic texts.

The man being cleansed closes his eyes as the priest splashes water over him three times. The priest, using his left hand, pulls the man to his side and submerges him three times underwater.

The priest thrice uses his wet finger to draw a line across the man’s forehead, from right to left. Three times he brings a palm full of water to the man’s mouth, and three times the man drinks.

Oaths are exchanged, as is a handshake, also called a kusta. A small wreath of myrtle, a Mediterranean plant, is removed from the man’s finger and placed under his turban, at which time the priest unleashes a string of holy words muffled by the thin white cloth covering his lengthy beard.

The ritual, choreographed down to the minutest detail, is far from complete. After aquatic consecration, a lengthy ceremony on land begins. The priest smears sesame on every forehead, taps every head dozens of times and through it all speaks in Mandaic, Arabic and sometimes English, softly at times, loudly at others, but always with a stunning, frenetic energy and rapidity.